Funny, original, award-winning pantomime scripts
by Alan P Frayn
“I cannot remember using so many superlatives to describe one show” (The Stage)
“Exceptionally inventive – a panto that has everything!” (Amateur Stage Magazine)
Go to content

She sweeps through the streets on snowy nights, looking in at the windows, her breath leaving strange icy patterns on the glass.  “Yes, I’ve seen them”, says Gerda, but little does she know her best friend, Kai is about to be spirited away to the evil Snow Queen’s Ice Palace.
And so, as the spring thaw arrives, Gerda's quest begins – an adventurous journey from Denmark to the frozen north, passing through every season and encountering a host of colourful characters on the way, thus providing more smaller roles and Chorus parts than any other script in this series.
A true pantomime rendition, unusual for this title, ensures traditions are upheld, whilst encompassing plenty of laugh-out-loud comedy moments!
Full cast and scenery requirements are listed below
Many productions of this script have won NODA and drama federation awards, including Cloverleaf Productions, who won both the Somerset Federation of Drama “Best Pantomime” awards (Best Overall Panto and Best Village Panto) which had never been done before!
"...The funny, pacey, inventive Alan P Frayn script fitted this talented cast to a tee – funny, original and pleasingly different from the standard fayre on offer during pantomime season.  The insertion of many slightly whacky additions raised the level even further in this production, delivered by a cast who looked like there was nowhere on earth they would rather be. Wow!  What a show!”  (SFD Spotlight Magazine) 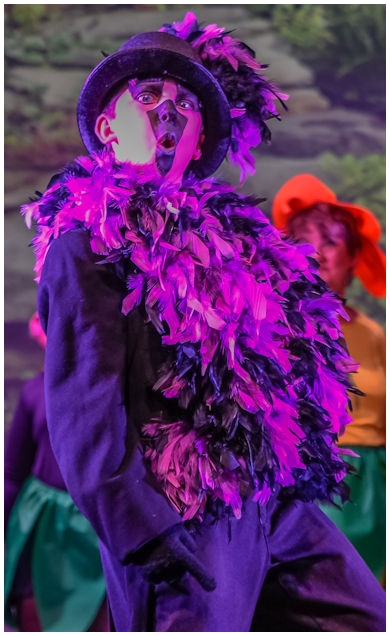 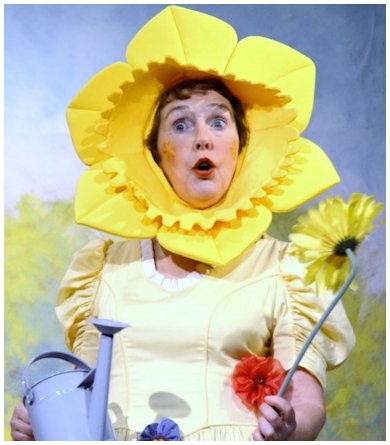 Peterston Entertainment Society
EXCERPT from Act I Scene 7: The Spring Flower Garden © Alan P Frayn
BLOSSOM:
How are my lovely spring flowers this morning?  (She inspects one.)  You’re just perfect, my petal – a very prim rose!  (Stooping to look at a smaller one:) Oh, dear – I think you need a bit more sun, flower!  (Inspecting another:) And you’re wilting – I must water you more often.
FLOWER 1:
I wish you would, Blossom – I’m dying of thirst again!  Please try to forget-me-not!
BLOSSOM:
Alright, alright – I’ll remember to do it dahlia!  (She inspects an older, jaded one.)  Perhaps you could do with a bit more passion, flower?
FLOWER 2:
I was once full of the joys of spring … before I became an elder flower!
(BLOSSOM comes face to face with PRECIOUS, the male sunflower.)
BLOSSOM:
Oh, there’s always one, isn’t there?  Oy, Precious – looks like you’re a bit off the wall, flower!
PRECIOUS:
No need to get personal, luvvie!  Just ‘cos I’ve got a bit of make-up on.
BLOSSOM:
A bit?  Just look at your two lips!  [tulips]
PRECIOUS:
Okay, I’ll wear a bit less in the fuchsia!
BLOSSOM:
Too right – we don’t want you turning into a blooming pansy!
FLOWER 3:
No, that would be an orchid situation!  [awkward]
GERDA:
(Entering SR) Oh, excuse me, but I was wondering – is this the way to …
PRECIOUS:
(Bursting in front of her, singing in an over-acted way:) Amaryllis!  [Amarillo]
BLOSSOM:
Hey, less of the sarcasm, Precious – or I’ll go and fetch the Roundup!  (To Gerda:) Please, do come in, my dear.  Norway is so lovely in the springtime, isn’t it?
GERDA:
Norway?  I didn’t realise I’d travelled so far!
BLOSSOM:
Now, make yourself at home, dear – be a good girl and sit over here amongst my flowers, while I go and fetch you some strawberries.
(BLOSSOM exits SL, GERDA sits and the SUNFLOWERS gather round her.)
FLOWER 4:
Please don’t be afraid, little girl – that’s just Blossom, our mistress.
FLOWER 5:
You may find her a bit wacky at first, but she’ll bring you no harm.
GERDA:
No, she seems very kind.  But I’m not stopping long – I’m looking for my friend, Kai.
FLOWER 6:
Maybe we can help you find the one you’re searching for?
GERDA:
I doubt it.
PRECIOUS:
We may be cleverer than you think, honeysuckle.  Just because we’ve got pretty faces and big petals, it doesn’t mean to say we’re all bimbos!
GERDA:
Well, do you know if he’s alright then?
FLOWER 7:
We’ve come from the earth, but Kai is not there, so he must be in the land of the living.
GERDA:
Thank goodness!  But when did you come out?
PRECIOUS:
Oh, I came out years ago, sweetheart!
Characters
Scenes  (Notes on simplified scenery are also included in the script)
AMATEUR STAGE MAGAZINE WROTE ...
“…The Snow Queen is faced with a catastrophe of the modern age – global warming.  As someone who would like it to be winter all year round, this is a disaster and she instructs the audience that they must not, under any circumstances, mention global warming in her presence.  This is almost guaranteed to ensure that they shout it out every time she appears on the stage!
Hans then takes up the story. The Snow Queen’s tears of anger freeze and form an icy lens through which she can view the world, but she is so evil that the tears have produced a distorted view and she sees only the worst in everything.  But then there is a terrible storm and the icy lens smashes into a thousand pieces that swirl around in the wind.
Gran’s granddaughter is Gerda, whose best friend, Kai, gets one of the fragments from the lens in his eye.  Gerda goes off to find him … then Gran and Gerda’s dimwit cousin, Helmut, set off to find Gerda!  They are all aided by a raven called Caw, who has endless delicious puns based around his name, and they all pass through a Swedish hippy commune before reaching the Snow Queen’s Palace.  They succeed in melting the Snow Queen’s heart and we can be assured that everyone will live happily ever after.
I enjoyed this script very much.  It is well-written with plenty of puns and silliness for the little ones, but with plenty to amuse the adults as well.  The author has resisted the urge to use double-entendres to please the grown-ups but has, instead, created some genuinely funny situations – the hippy commune being particularly good.  There is even an educational element amongst all the high jinks, so this really is a panto that has everything!”
SOMERSET FEDERATION OF DRAMA REPORTED …
“…At award evenings there are expectations, occasionally there are a few surprises, and once in a while there is a seismic shock!  Saturday night’s Cinderella Trophy Awards ceremony contained just such a shock as Cloverleaf Productions, in one of the smallest venues on the circuit, scooped the top prize – The Cinderella Trophy itself – for their hilarious rendition of The Snow Queen written by Alan Frayn.
They also won the Spotlight Shield, which is only open to village societies and this would have been an accolade in itself, which deemed them to have staged the best village pantomime in all of Somerset. For them to have gone on to also win the top award – knocking Taunton’s Wayfarers fantastic performance of Robinson Crusoe and the Pirates (also by Alan Frayn) into the second slot – is a huge achievement!  This year’s production was hilarious, with the audience laughing from start to finish!”

“…Alan Frayn’s Snow Queen is a new addition to his long list of pantomimes, providing a family panto packed with fun and frolics and all the ingredients to ensure a fun packed evening – and it worked!”

“…Having established a fantastic working relationship with Alan P Frayn in 2015, with our production of Ali Baba and the Forty Thieves, we were very keen to work with more of his material for our next production. Alan was once again very gracious in customising his script to suit our very large cast of 150 students. A number of new characters were created and Alan was very receptive to any suggestions that we made. The Snow Queen, like Ali Baba and the Forty Thieves, proved to be an outstanding success and attracted critical acclaim within our local community.”

“…A delightful Hans Christian Andersen fairy tale, Alan Frayn’s adaptation has created a panto with wonderful rhyme between good and evil, much humour, jolly music, some mischief, a talking reindeer, a raven who says, ‘cawl me Caw’ and lives in an ‘acawn tree’, Granny Fanny Annie, with a bit of slapstick and audience participation – a perfect recipe!”

“…Good direction starts with a good script. This was an Alan Frayn script that I haven’t come across before, but the fact that the audience had laughed more in the first half hour than some shows manage in an entire evening was testimony to the sharpness of the script. There was plenty of audience interaction too. All tremendous fun that had the audience eating out the palm of your hands. In addition to the fun of watching a new pantomime script, there were some imaginative and innovative ideas – this was a fresh pantomime that felt right up to the minute!”

“…This year’s January production by the Peterston Entertainment Society was The Snow Queen, a well know story converted to a pantomime by Alan Frayn. It proved to be an inspired choice – a show with a really good storyline, lots of opportunities for individuals to display their skills and plenty of fun, including a good array (but not too many) traditional pantomime jokes and japes.”