A very creative adaptation, full of artistry and magic, re-awakens this tale-of-old, with bucket-loads of comedy!

For a great traditional pantomime, but a refreshing break from the more conventional format, this cracking new version of Sleeping Beauty is right on the money!
An extra-large portion of comedy and some very original twists and turns along the way make for a novel and artistic production.  The storyline is cleverly managed and the common imbalance between Act I and Act II content has finally been resolved!
Nurse Hettie Harpic, the puddle-brained Muddles and two hapless heralds, Fetch and Carrie, ensure the laughs come thick and fast, especially when they meet head-to-head in a hilarious schoolroom scene.  With generous possibilities to keep the Chorus busy, there are also more principal roles for females than the norm.
Whilst there are lots of opportunities and suggestions for the more ambitious, it can be staged effectively with a minimum of scenery.
Full cast and scenery requirements are listed below
Many productions of this script have won NODA and drama federation awards, including Little Hallingbury Panto Group, Market Drayton AO&DS, The Bolsover Drama Group, Saundersfoot Footlights and NOMADS, Newmarket (all of whom won NODA "Best Pantomime" awards)!
"...Sleeping Beauty was a triumph. With an up-to-date script from Alan Frayn a scintillating show has evolved in this fun-filled, scrumptious slice of panto magic!”  (Cornish Guardian) 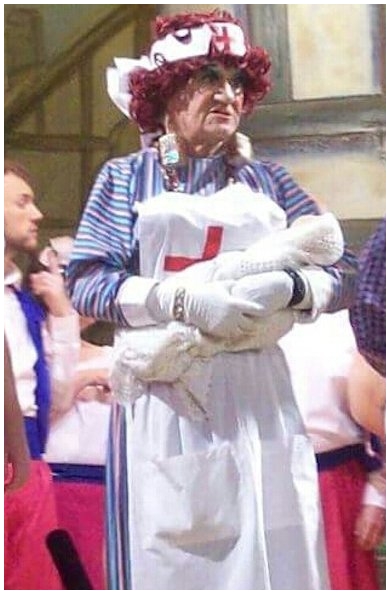 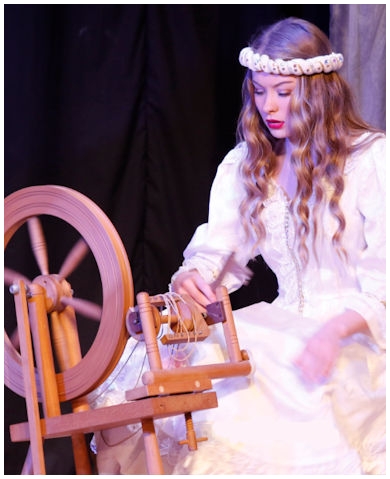 Peterston Entertainment Society
EXCERPT from Act II Scene 2: The Forgotten Room © Alan P Frayn
Characters
Scenes  (Notes on simplified scenery are also included in the script)
AMATEUR STAGE MAGAZINE WROTE ...
"...It would be unfair to dedicate a disproportionate amount of space to one publisher and writer ... (following a long review of Robinson Crusoe & the Pirates in the same issue) ... and yet, by the same token, I cannot let this second "hot off the press" adaptation of one of pantomime's most difficult subjects pass without some introduction.
It is a traditional story which demands a totally imbalanced cast (as compared to any other pantomime).  Because the story starts at the birth of the Princess and no less than 18 years pass in the first six scenes, we don't meet the Principal Girl until Act I Scene 5 and, inevitably, by the same token, we only meet the Principal Boy a scene later, making both of these "leading" roles much smaller than usual.  On the other hand, Frayn has realised that such a constraining original story makes it possible to provide much meatier roles for the other characters and, in his version more principal roles for women than for men.
Once again he provides copious production notes in his five-page preface.  And one thing impressed me more than almost anything else – he has truly beaten the curse of the common imbalance between Act I and Act II – read the introduction to see what I mean."

“…This was a quick-fire family pantomime – funny, frivolous and as fantastic a frolic as you could find on any professional stage in the UK.”

"...They chose a good script. Alan Frayn is one of the funniest writers in the business today and the script was very clever with plenty of gags. Dame Dottie Dettol picked out one poor fellow in the audience and ribbed him mercilessly throughout the evening. All in all, it was great fun, providing plenty of chuckles and quite a few moments of wonderment.”

"...This was Alan P Frayn's adaptation of the famous fairy tale which tells of a beautiful princess who is cursed by an evil Witch ... it was pure comic genius."

“…Like all good pantomimes (and this one was excellently written by Alan P Frayn) it opened with the good Fairy and her four young Rainbow Fairy helpers. The schoolroom scene, where poor Muddles was dropped on the floor so many times, had the audience in hysterics. Nurse Dottie Dettol, for me, was the star of the show. His ‘latching on’ to a member of the audience was perfect – it gave many laughs but without causing too much embarrassment. A very enjoyable evening for cast and audience alike.”

"...Good quality family entertainment, I would guess, is the reason behind the everlasting popularity of panto. And this latest production of Sleeping Beauty has it by the bucketful. Written by Alan Frayn, the script is original and highly entertaining."

"…Along the way there were jokes aplenty and Alan Frayn's script was suitably adaptable to include a wealth of local references and remarks. There was a real warmth and friendliness about this pantomime that drew the audience members in and made them part of the fun. It was a truly delightful and entertaining show."

“…This magical panto is fun for all ages … enchanting, entertaining and very funny. Sleeping Beauty by Alan Frayn had all the ingredients for this kind of show – audience participation aplenty, jokes and slapstick humour. There were some good set pieces – in particular, a place name sketch, which was probably the funniest moment of the show.”

“…Sleeping Beauty by Alan Frayn was a helter-skelter ride from start to finish, featuring song and dance, non-stop jokes and a dash of really creative staging, a rare treat! Pages, Fetch & Carrie, provided an original comic interlude with their place names on envelopes routine and other memorable moments included the scene where the Bad Witch is preparing her spell in her cauldron with her ravens. The scenario where Princess Rose discovers the witch at her spinning wheel in the derelict tower was quite excellent.”