Hansel and Gretel … Hot off the press, our brand new 20th panto!

Not before time, a sparkling, up-to-date pantomime version of this heart-warming tale

By popular demand, with so many groups saying, after years of searching, they’ve been unable to find a modern, funny pantomime version, Hansel and Gretel is finally brought into the 21st Century with this exciting new script!
Laughter is high on the agenda with some unusual comedy routines, together with plenty of adventure, variety and traditional panto fun.
Can Bluebell, the Fairy of the Forest, manage to rescue Hansel and Gretel before they are eaten by Nightshade, the Wicked Witch of the Woods, who is determined to turn the tables this time and finally get her way?  Meanwhile, the comic twosome, Nut-Meg and Basil, add to the turmoil when they try to sell all sorts of foolish food and fake fare foraged from the forest!
There's plenty of involvement for the Chorus and Dancers, who have a total of up to 10 identities between them.  And whilst it can be staged in a very straight-forward way, the more ambitious can really go to town on some of the scenes – in particular, the Sugar Candy Cottage (exterior and interior).
Despite having the benefit of such a well-known title and storyline, Hansel and Gretel certainly hasn’t been “done to death” as a pantomime, so this panto-tastic script has everything going for it!
Full cast and scenery requirements are listed below
“…They zipped through the Hansel and Gretel tale, offering up a few alternative twists along the way, as our heroes disappeared deeper and deeper into the forest.”  (Quest Media Network) 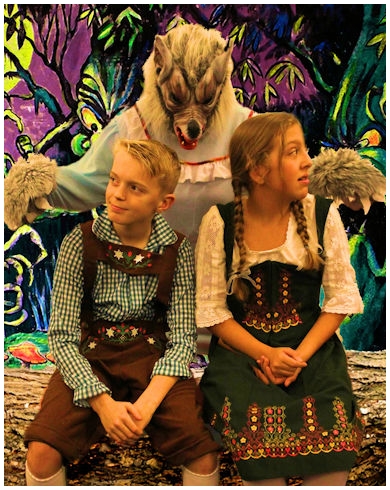 “…Alan P Frayn's original pantomime brought the timeless children's fairy tale of Hansel and Gretel to life and there was festive fun aplenty as all the characters within the tale were brought magnificently to the stage, accompanied by some unusual and not quite so well-known ones, as is to be expected in a pantomime! There was an abundance of audience participation and jokes, all of which added to the overall enjoyment of the production. Grab yourself a ticket and you'll soon be feeling completely in the mood for some Christmas cheer!”

“…More than 60 youngsters aged from just seven years old sang and danced their way through their highly entertaining panto production of Hansel and Gretel – a modern dramatic take on the capture of our two heroes by the crows, with a simply great gingerbread man dance and a magnificent circus routine. All in all, this Hansel and Gretel had all the ingredients for a perfect panto night out!”

“…The pantomime Hansel and Gretel came as a complete change. The plot involved two children, Hansel and Gretel, whose wicked stepmother, Hildegard, decided to leave them in the woods, against the wishes of their father, Fritz, where they would be caught by the wicked witch, Nightshade, and eaten. They were rescued thanks to the influence of the good Fairy Bluebell. Interspersed with this were sub-plots involving a Prince, a circus and a gypsy party given by Peggy Pumpernickle. The whole show was a delight from start to finish.”

“…This year it’s Hansel and Gretel – a show that entertains the whole family. The Dame ‘Peggy Pumpernickel’ was larger than life and very funny. The storyline flows, with some great humour – and it’s good to see so many young people in the cast. The proof that the show worked was the audience reaction – everyone was having a great time singing along, clapping, cheering and booing – all the things you want to see at a pantomime.”

“…The show was a fantastic success and we again broke our box office record, something that I didn’t think possible, given the success of The Snow Queen in 2017. Over 4000 people attended the 12 shows and the feedback has been tremendous. The students have had an absolute blast. I wish I could have "live streamed" the atmosphere on closing night to you. We are once again indebted to you for your willingness to customise the script to suit our specific needs and for helping to let so many students live their dream of having a speaking role.”

“…Hansel and Gretel was the choice for Minehead Panto People and what a great choice this turned out to be! The script by Alan P Frayn called for a large cast – this lovely story included familiar pantomime characters including Principal Boy and Girl, Prince, Dame, Fairy and not forgetting that wicked Nightshade! Time seemed to fly by as the audience had much to savour with much variety and colour. A highlight of the evening was ‘Join the Circus’. This was a tremendous scene that I loved as it momentarily took you away from the world of panto in its own unique way.”

“…A performance which left the audience clapping and guffawing, with dastardly baddies, brave heroes and a perfect smattering of panto innuendo but not so much blue that the dads had to cover the ears of their little ones. It had everything a panto should have as the intrepid Hansel and Gretel managed to overcome both the wicked Nightshade and their cruel stepmother, Hildegard. And of course, a must for any panto – there was audience participation a-plenty – “Don’t be a Wally, Wally”, “He’s behind you” and plenty of opportunity to boo, hiss and cheer. And did the audience enjoy it? “Oh yes we did”.

“…It must be very comforting and, indeed, gratifying for any committee of a dramatic arts group to know that they have sell out performances prior to the show. This year’s pantomime from the Friends of the Art Theatre was Hansel and Gretel. While this would not be classed as one of the most well-known pantomimes, it still had all the chemistry of what makes a good panto. There were good and bad characters, silly characters, slap stick, innuendo, catch phrases to shout out, and time to engage with the audience. Congratulations to everyone who has contributed making this pantomime a super afternoon’s entertainment.”